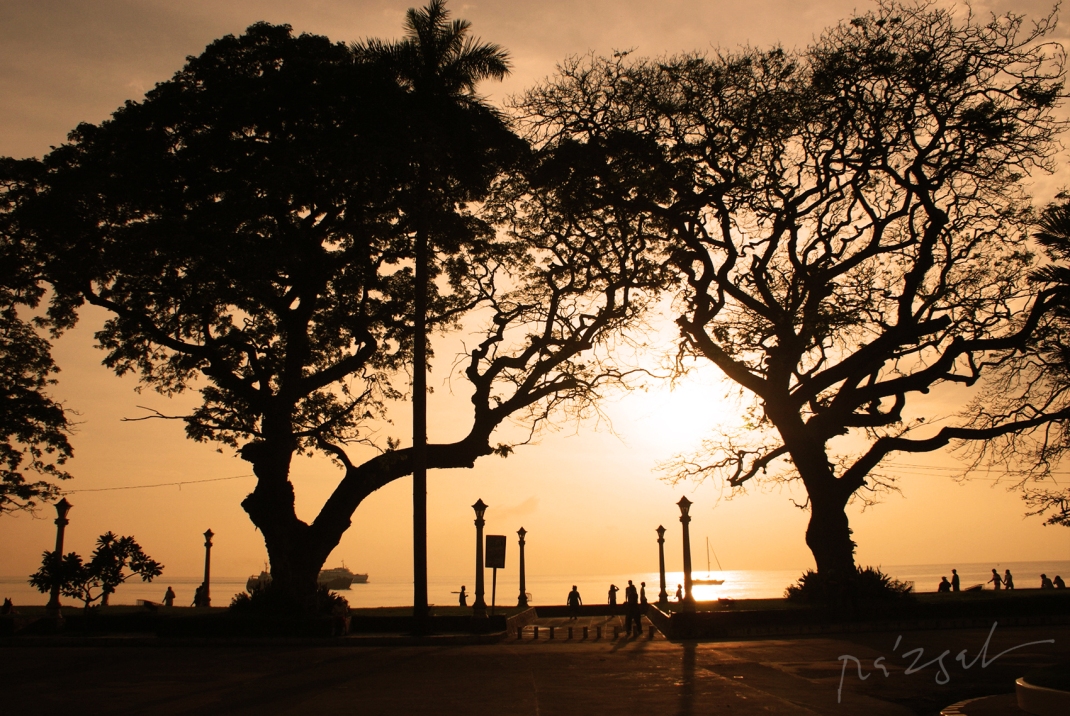 Living life in Dumaguete City for the last year and a half has certainly been a playground of learning, creating, practicing new skills and immersing in the smorgasbord of cultural arts.

And all it took was for me to shout a resounding ‘Yes’ to ‘Life’ and to be willing to dance in the mystery and face my own ring of fear – prompting the Universe to rush in to support me – bringing about people, places and events to nudge me out of my comfort zone, and to see just how committed I truly am to my soul’s awakening.

I am amazed how the journey around my ring of fear, the terrible dread of public speaking for example, has subtly seduced me into accepting invitations I would normally say, ‘No fucking way’.

Late last year, I was invited to be part of an art exhibition here in the city titled the “Plate Movement”. It was a fund-raising show involving kids and artists to paint on a dinner plate for auction to benefit the kids undergoing treatment for cancer. I was introduced to the local Paediatric Oncologist and felt moved to ask her if I could visit some of the children who were currently receiving treatment – having in mind to extend healing energy work. She explained that her patients rarely stay in the hospital, so visiting them was not possible. Yet, a few weeks later, I receive a phone call inviting me to be the Guest Speaker for their first ever gathering “Kids Christmas Party”. I feel a wave of excitement and confirmed a ‘Big Yes’ – before the mind has time to give me all the reasons why I should decline. And thank God, despite the nervousness around speaking, I had the most heart-felt moving experience being there amongst these beautiful children exuding so much joy, laughter, and profound zest for life. 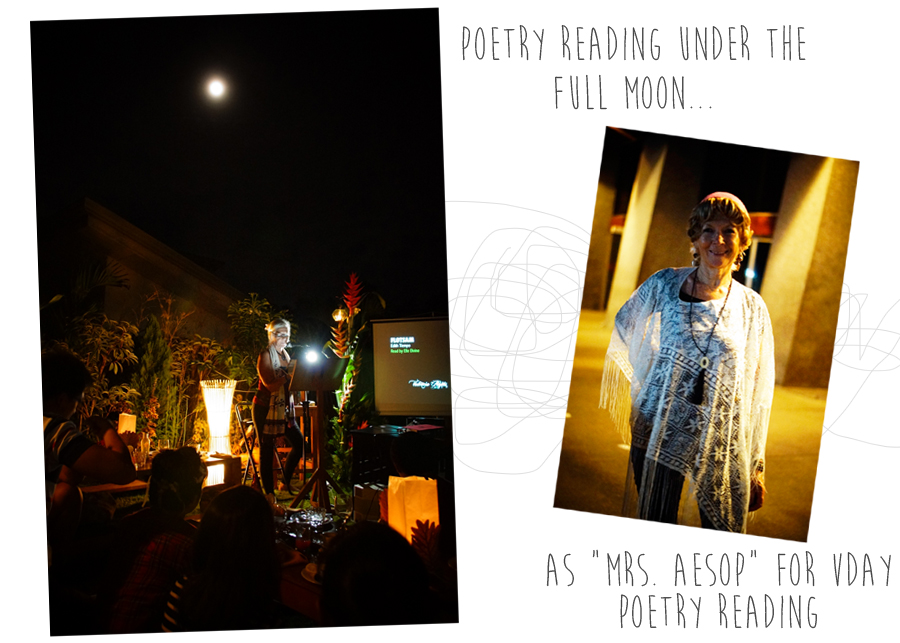 The Universe subtly unfolds her mystery once more by arranging an unexpected invitation for me to join the after-performance dinner celebration with the Manila Ballet Company on their recent tour in the city.

There was a moment of hesitancy when I was asked if I could say a few words after dinner and share something with the dancers and distinguished guests. I said ‘yes’ and was immediately invited to the microphone. All I can remember was the room becoming a quiet hush, waiting, while I breathed deeply, checking for guidance on what to share. One of the distinguished guests was Margarita Moran, the former 1973 Miss Universe and the president of the ballet company. Perhaps the universe’s sense of humour?

Another portal opened for a new experience, I became a special fellow for the 53rd Silliman University 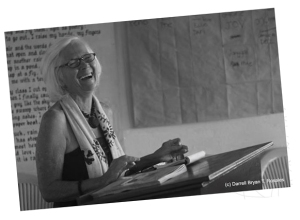 Writers Workshop – the longest running Writers Workshop in Asia. I found myself speaking yet again through the microphone for a couple of poetry readings at different dinner events and speaking on another occasion on behalf of my fellows, thanking the panellists at the closing ceremony of the first week of the workshop.

And come mid-July, there was an invitation to introduce a beautiful artist friend, Jana Jumalon-Alano, for her solo exhibition titled, “Everything About This Girl” at the Luce Foyer Gallery, Silliman University. And yet again, I was in a very large group including fellow artists, art enthusiasts, students and guests.

Nervousness shows up when I dismally fail to memorize what I have written; I start to shake so much that my cheat sheet notes are barely readable. I pause several times to breathe deeply, grabbing my left hand to try to steady it. I share a little humour midway through which allowed me to relax and ease the tension. There are a couple of comments later about the shaking but all in a positive fun vibe.

And the latest turn of events was being invited to be one of the presenters for the first launch of Pecha Kucha Dumaguete. (Pecha Kucha is a fast-track presentation using 20 slides with a given 20 second time slot for each slide.)

After I overcame the nervousness and squashed the old pattern of trying to get it right, I attempted to yet again memorize the script for each slide. It was hard work.

So, I threw the script away and just went with the flow and had fun. On the night, I did okay because I was speaking joyfully on what I am most passionate about – Art and Healing. 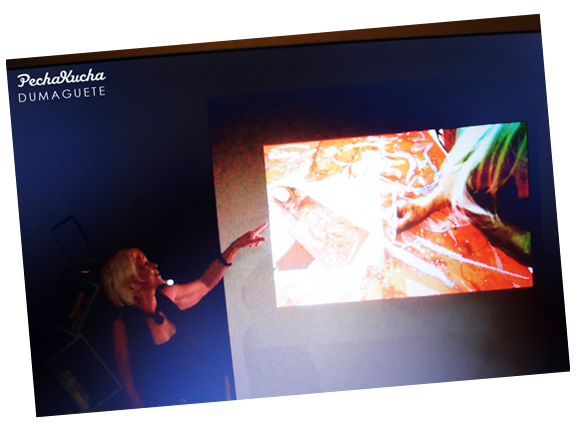 The memory of being teased and laughed at for stuttering most of my primary school years faded in comparison to the deep pocket of fear that made its home in the lower section of my spine whenever I was asked to speak in front of a group of people. Stabbing sharp pain, leaving me weak in the knees, dizzy,
to almost passing out and causing the body to sweat profusely is now a thing of the past. This crippling dark energy has lessened in its intensity each time I have said ‘Yes’ to Living Life.

Now, that calls for a celebration!

There are still many areas for me to improve my skills as a speaker which I am excited to pursue in a creative fun manner. Singing lessons pop into my awareness and I feel some resistance arising already.

I smile, I breathe…

So, I wonder, what is your ring of fear, and what is it that is preventing you from truly Living Life?

“You live like this, sheltered, in a delicate world, and you believe you are living. Then you read a book… or you take a trip… and you discover that you are not living, that you are hibernating. The symptoms of hibernating are easily detectable: first, restlessness. The second symptom (when hibernating becomes dangerous and might degenerate into death): absence of pleasure. That is all. It appears like an innocuous illness. Monotony, boredom, death. Millions live like this (or die like this) without knowing it. They work in offices. They drive a car. They picnic with their families. They raise children. And then some shock treatment takes place, a person, a book, a song, and it awakens them and saves them from death. Some never awaken.” ― Anaïs Nin, The Diary of Anaïs Nin, Vol. 1: 1931-1934