“Did you ever wonder if the person in the puddle is real,  and you’re just a reflection of him?” ~ Bill Waterson

The word reflection was occasionally ruminating in my quiet thoughts throughout the day, eventually nudging me to open my small Collins Gem English Dictionary to define the word’s meaning.

Reflect (v): throw back, esp. rays of light, heat, etc.; form an image of; show; consider at length; bring credit or discredit upon.

Reflection (n): image of an object given back by a mirror etc.

I sit pondering why this word and wonder what is truly being shown and what is it mirroring and giving back?

Do I consider at length, and form an image looking back at me or do I see the return of rays of light?

A lot to reflect on I would say!

Mr. Google says: the throwing back by a body or surface of light, heat or sound, without absorbing it.

Now this is an aspect I had not considered at length.

Sunset Meditation on the island of Siquijor known as “isla del fuego” – the Island of Fire.

I have had many moments of reflection looking deeply at and within myself over the past decade following the discarding and letting go of all the surface crap of this worldly world.

I travel light or at least I thought I did after selling my house and car and giving away all other treasured possessions, even my teddy bear who was my companion for six decades.

I arrived in Bali in 2007 with one large suitcase, a carry-on bag, laptop and my feather-down pillow that I am still attached to.

I have realized over the past seven years and seven months that that was just the beginning.  Minimizing all of my worldly possessions down to a suitcase and carry-on luggage was only light on the physical plane. There was so much heavy stuff I was carrying around that I was unaware of.

The emotional body was overloaded with excess baggage, weighing me down; my mind constantly operating out of suspicion and seriousness. Not trusting what the Universal Intelligence was offering me, I chose what was familiar; living in a negative energy current of blame, complain and judgement, and not recognizing how this was reflected back into the body and how it is absorbed on a cellular level – effecting the immune system, restricting the flow of the Universal Life Force stream, and thus making life a misery. I would avoid feeling anything, pretending everything was ‘just fine’ when my mind was foggy, floating off into my own little world of spacy unproductive busyness. In fact I had trained my body so well, (from a very young age) to be constantly on alert and the moment my nervous system was triggered by any disturbance within me or around me, unbeknown to me at the time, it (my body) would reverse breathe causing an even greater dysfunctional confused state.

I projected onto others toxic verbal diarrhea by unnecessary gossip, criticism, blame, and I mastered the art of subtle manipulative control, disguising it all behind a false persona smile, and a deceitful caring kind nature. The only person I fooled was myself!

By not wanting to own my own self-deception that was keeping me bound in the victim role, healing could not occur. Awareness and ownership of the ugliness of the ego with its lies and fear based thoughts, needed to be exposed fully before any form of healing was possible.

Total self-honesty and forgiveness of oneself are essential ingredients for the healing of the physical, mental, emotional and spiritual bodies. I learnt from experience, I cannot heal what I refuse to feel. Period. 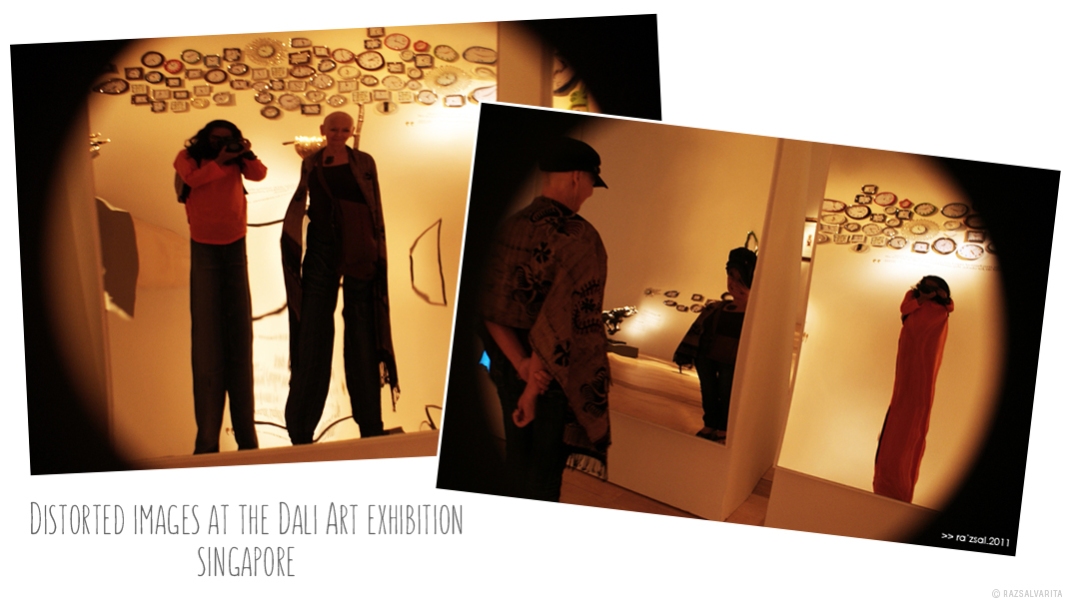 It has taken a lot of practice over time to soften the contractions armouring the body and conscious breathing, awareness, and self-inquiry, is an ongoing journey involving constant correction and discipline, otherwise I will be forever absorbing the reflections into the body, when the desire and intention is to form a new image and return as a ray of light.

Looking into a mirror and seeing myself as young, old, ugly, pretty, fat, thin, wrinkly or soft skinned, (the list can go on and on into infinitum) is only showing me the quality of my own thoughts and the level of consciousness my mind is operating from.

One moment I can look into the mirror and see myself as old, wrinkled and ugly then ten minutes later I catch a glimpse of myself in the same mirror and think wow, who is that beautiful, elegant, stunning, angelic, divine woman.

So what changed? The mirror doesn’t change, it simply reflects. It is the mental image that I hold of myself that changes. The energy I am projecting out with my own thoughts on how I feel about myself in that given moment, is what is mirrored back to me.

I caught a glimpse of myself off guard, with no armour, I was the witness looking at myself and in that split second I was unaware it was me I was looking at. It was the light shining forth from my Soul that the mirror bestowed back to me.

To put it another way: The beautiful glimpse I caught of myself in a fleeting moment had no mental significance attached to it, so the image was not absorbed and personalized as my body. It was simply a form shown and witnessed by the seer.

Why do I embark on a journey of reflecting and healing?

Because I have come to trust that all that is being shown and revealed to me is part of my healing journey, even the nudge to explore the deeper wisdom of a word that is speaking to me on a subconscious level.

I believe that each time a situation arises that pushes my buttons and I feel either anger, sadness, fear, even rage – I know that this is not caused by anyone or anything outside of myself. This is a profound gift from the Universe, offering an opportunity to propel myself forward with courageous conscious choices and bolder steps into the unknown mystery of the higher realms of consciousness; all the while still maintaining and grounding a physical human presence. It all sounds so simple but it is not so easy to achieve while living as a mere body in this world of small mindfulness.

The call is to look beyond the density of the physical body and reflect on the light within each of us as Sovereign Souls, thus bringing about the remembrance of the Truth of who we truly are and why we have chosen to incarnate on our Beloved Earth Mother at this specific time of great change. The Earth and all forms of nature (including humans) created and brought into existence from the One Infinite Source of All Creation, known by many Names but universally referred to as God or Love, is not the creator of the World. The World is manmade.

In my years of exploration in deeper awareness and understanding, I learned that the Earth and the World are two separate entities/identities – The Earth is Creation It-Self created in the image of the mind of God/Love, whereas the World is made up from the astounding ability to use the brilliance of the intellectual human mind to construct, control, make form and live out one’s own experiences that will leave us striving for perfection, always wanting to achieve more, but never feeling truly satisfied, therefore birthing separation and lack consciousness.

We can of course co-create from a place of Love and Higher Consciousness in ‘His/Her Image and Likeness’ thus reflecting Love and Light into this insane made up world of fearful thoughts, unloving words and evil actions.

The veiled schizophrenic people pleasing personalities I managed to maintain, unconsciously, over the many years of seeking approval, striving for perfection and trying to fit in like a chameleon, were revealed to me simultaneously one night during my solo performance at the graduation evening for my acting class. Nervousness triggered a panic attack which then started my heart racing so fast there was nothing I could do but allow this overwhelming pounding in my chest my full attention. Connecting with my heart, (finally) shifted a deep seated fear – of living and being my authentic self – thus exposing and bringing into the light a hidden truth. I have been ‘acting’ all of my life! And from sheer exhaustion of all the pretense, I whole-heartedly asked myself “Who the hell am I?”

Mirror, mirror, on the wall – Who will I see looking back at me? Dark shadows of myself or rays of Divine Light as My-Self.

The choice is always ours.

{“As you live Deeper in the Heart, the Mirror gets clearer and cleaner.” – Rumi}

So let’s all “Love, Create, Extend” our own unique Being of Light and Beauty into this ever changing crazy world.

The 2011 Movie ‘This Must be the Place’ starring Sean Penn as a retired Rock Star is a beautiful example of being weighed down by the past. Throughout the entire movie he is either dragging behind him his personal shopping cart or a small carry-on suitcase. All of his former life experiences baggage up and dragged along behind him as he shuffles slowly about, bored and seemingly lifeless. Even when his shopping trolley is empty it still seems a heavy load to bear. 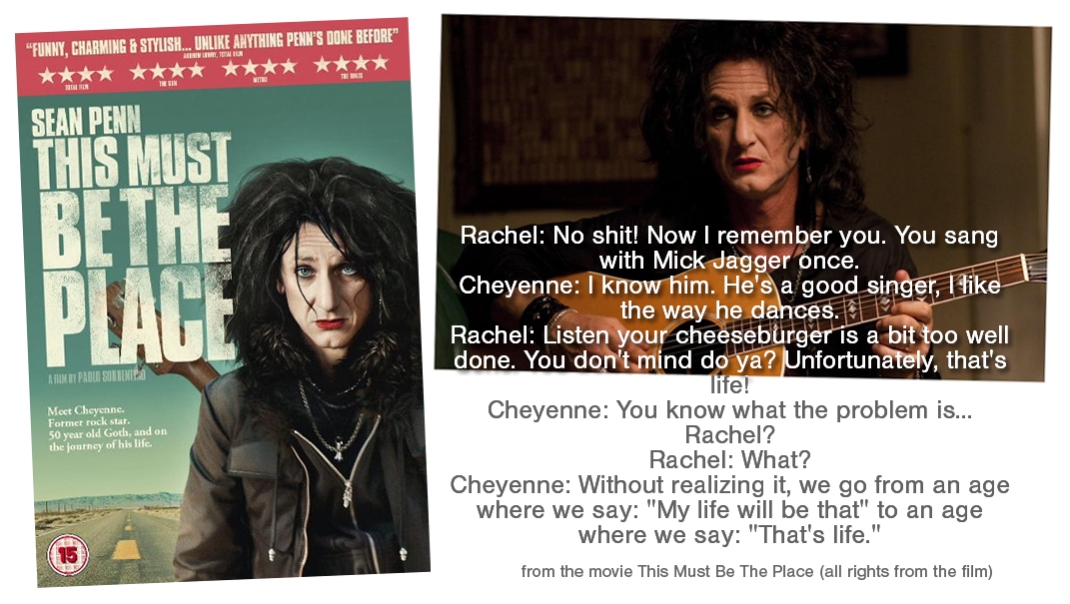 The willingness to seek the truth and heal the past through forgiveness and compassion have a life changing effect on the main character Cheyenne.

Well, that is how I interpreted these scenes of the movie only because I could relate so personally with it.

Carry your baggage towards silence, When you seek the signs of the way. ~ Rumi