by Ian Rosales Casocot | The Spy in the Sandwich

What’s often frustrating about Dumaguete is how—for a place that is supposedly steeped with a fine sense of culture and the arts—it lacks two basic things that would make this claim more truthful than usual: (1) it sorely lacks museums, and (2) there are barely any galleries.

Where is a museum that should be showcasing the best and the most original of Oriental Negrense culture and artistry, ran with professional curators who know how to do their jobs? Bacolod has one from what I’m told, which denies Dumagueteños any sort of excuse except a lack of imagination. From my readings of local history, there have been some attempts to found exactly this in Dumaguete, but there always seems to be a lack of political will, or the wherewithal to slay goliaths that usually spring from such enterprise. How I wish one of the elegant sugar mansions along the Boulevard have been converted to house exactly this collection—but even the mansions themselves are dissolving away into commercial plastic surgery in a city that has not yet learned to appreciate its cultural heritage.

One significant landmark in Dumaguete, for example, is old Silliman Hall. It is the first building in campus, designed by founder David Hibbard himself in the American colonial stick-style architecture. Silliman Hall and the old Bell Tower bookend the very definition of the Dumaguete landscape. But in 1972, there was a proposal for Silliman’s Hall demolition—in the name of progress, of course. (Why is it that “progress” is always evoked to justify the building of ugly new buildings?) But the plan was strongly opposed by one Commodore Jose Andrada. His vehemence was such that he gave a generous donation instead to restore the building’s tower room. The plan was ultimately scrapped, and thank God for that.

Can you imagine Dumaguete without Silliman Hall? I can’t. I don’t think anybody can. Its eventual restoration in the 1990s finally paved the way for many of us to think that an appreciation for heritage can in fact be fruitful in the long term. But think about how the loss almost happened. And look at how our Rizal Boulevard is changing, and how much of our cultural heritage is being erased—without any of us voicing out a hint of complaint.

What museums we do have are of the anthropological and the biological sort in Silliman University—important institutions, of course. But the lack of a city museum focusing on the arts is jarring. We have become a city that has become ridiculously unaware of our artistic heritage.

Nobody knows about Jose Las Piñas, for example—the prime portraitist from Dumaguete in the 1950s. Nobody knows about Francisco Verano. Nobody knows about the rich period in the life of National Artist for Painting Fernando Amorsolo when he used to frequent the city to chase its light and rustic beauty, which eventually informed many of the paintings he did here. (One Amorsolo now hangs in the Office of the President of Silliman.) Nobody knows about groundbreaking work by some of our contemporary artists, from Paul Pfeiffer to Karl Aguila, from Kitty Taniguchi to Amihan Jumalon, from Mariyah Taniguchi to Jana Jumalon, from Razceljan Salvarita to Kristoffer Ardeña, from Jutze Pamate to Mark Valenzuela, from Hersley-Ven Casero to Paul Benzi Florendo, and so on and so forth. Nobody knows what part Dumaguete art has contributed in the shaping of national art. And that’s sad.

There are barely any galleries either, only Mariyah Gallery off Bogo Junction and the one at Sidlakang Negros. The Cultural Affairs Committee at Silliman does put up several exhibitions at the Claire Isabel McGill Luce Auditorium Foyer Gallery, which sometimes spill over to the greatly unused exhibition space at Silliman Hall. Beyond these, there’s absolutely nothing.

Except for the restaurants.

For some reason, the restaurants are the ones taking up the slack. Perhaps in Dumaguete we admire our art alongside our food? Or perhaps, our culinary entrepreneurs just have a more refined sense of the visually artistic. The regular foot traffic that food brings makes the set-up ideal, too. When Jutze Pamate ran the now-defunct Jutz’s Café, it operated a gallery on its restaurant walls, and offered good art alongside its Tuscan pork chop and garlic fish fillet. Wing del Prado used to showcase artists she loved in a revolving exhibition at Gabby’s Bistro. Mike Butler—who owns an extensive collection of local art, which is housed at CocoGrande Hotel—used to make available the walls of Coco Amigos for local artists. Sanda Fuentes does the same thing in Lab-as, and Babbu Wenceslao in El Amigo. New to the ranks is Iris Armogenia, who has been active of late to use the walls of KRI to exhibitions of artist-friends.

The latest from KRI is Interference, a small exhibition that gathers together four artists of uncommon brilliance: Elle Divine, Razceljan Salvarita, Jana Jumalon-Alano, and Rianne Dawn Salvarita. It’s interesting to note that they make up exactly the kind of artists who usually thrive in Dumaguete—the beautiful langyaw, two coming from Bacolod, one from Australia, and another one from Zamboanga. Their disparate roots coupled with distinct visions inform an exhibition that varies in mediums and artistic expressions—and perhaps it is that variety that they truly celebrate. For them, after all, Interference means “a surge of ecstatic creativity,” a “raw[ness] of infinite possibilities.”

“[It] is a radical frequency,” their collective statement continues. “Taken from a higher realm, it is a positive deviant. It triggers inclusion towards a diversified perspective that caters to a change from monotony… [It] projects a new vision of maturity in understanding the scope of sundry forms of art expressions in the borderless creative playground. It is a virtual ripple that touches the edge of the monotonic zone as it makes a subtle invitation to take bolder exploration in the spirit of creativity.”

In other words, at least in my reading of it, it is a collection by four artists who are breaking new grounds from the kind of art they have always been associated with. And that is evident enough. Rianne Salvarita, whom I have known to do representational art but pushing it into the eerie regions of the visceral, is here experimenting with a sort of cubism that runs away from the old embrace of abstract expressionism. Here, the geometric shapes have shadows; they have an undulating sense of physicality that courts his old representational mode. This is most apparent in “Iceberg,” which is a whitish-blue landscape that echoes its title, but fixed in that geometric rendition that makes it both solid and fluid.

Rianne’s brother, Razceljan Salvarita, on the other hand, has gone away from the mandalas and circles and fiery vulvas of his Bali phase—he had been a fixture in the Indonesian art scene for some time—to experiment in a kind of found art that isn’t. Because there’s still a painterly quality to his assemblage of wood and linen cloth and rope and what-not. Take a look at his “Tapestry in Symphony (in A Minor).” The pieces of repurposed wood he has gathered are wrapped in cloth and placed in a haphazard manner, approximating picket fences, on top of a painted board. The result is both rough and elegant—and together with his other works in the collection, they surprisingly resemble the spirit of abstract expressionism, like a Kandinsky with the flavor of eco-art.

The surprise for me in this exhibition is the revelation of Elle Divine as artist. One of the loveliest women I know, she takes my breath away with “Map of HerStory,” a study in red broad strokes and drippings that I would have described as a marriage of Pollock and Rothko—but with none of their masculine rages. Her painting pulsates with feminine power, her reds carefully textured out with painstakingly placed acrylic dots that give shape to the swallowing hue. All in all, her paintings come off as almost portraiture in nature—but not of the human face, but of the human aura. 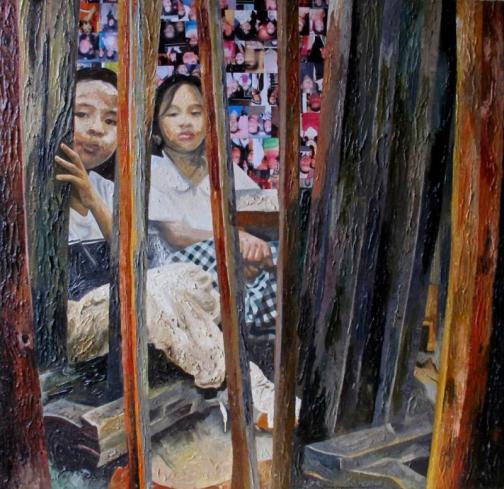 Jana Jumalon-Alano, however, takes the biggest leap in her artistic evolution, and lands beautifully. I remember her paintings of pastel-colored nudes before, which imported a sense of feminist didacticism that I admired greatly but wasn’t particularly moved by. But what she does in “Wonder Years,” a portrait of two children peeking out of what seemed like broken wooden panels of a wall, to reveal their nondescript expressions, a gallery of family pictures behind them—is a wonderfully composed work that combines a sureness of craft, a tone of earthiness, and a narrative of the strikingly autobiographical, varnished with a singular warmth that pervades the painting’s affect. Her mixed media piece “Bira Cara Series” is of the same import.

Interference feels like an introduction to four great—but surely separate—exhibitions. Which is understandable, given the capacity of KRI as exhibition space. If only for this wonderful glimpse it offers, KRI is to be highly commended for taking up a cause Dumaguete City itself seems reluctant to. 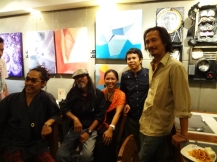 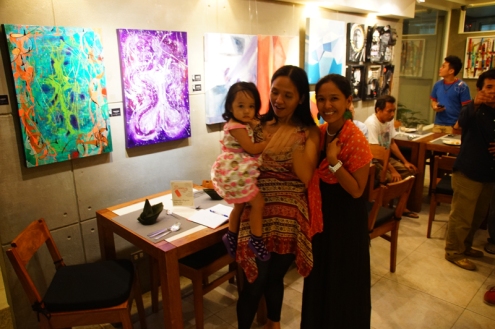 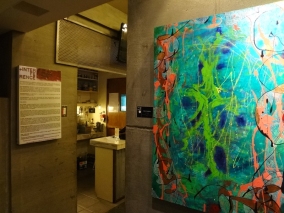 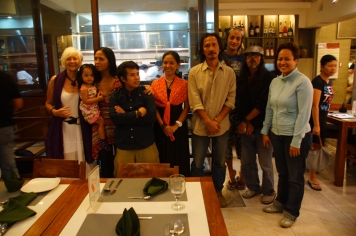 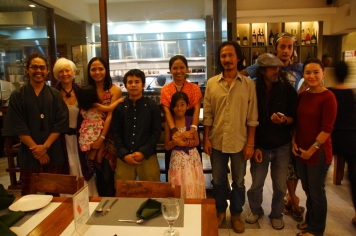